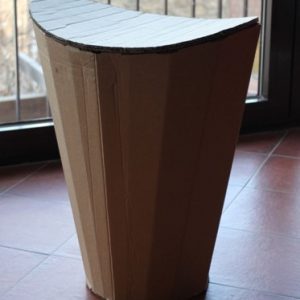 The cost of concentrating solar power devices is more than 50% of the total cost in technologies using such concentration one to heat strongly a fluid and generate electricity through a thermodynamic cycle. Reloj de Sol is an alternative to conventional concentrators in order to reduce this cost. The peculiar geometry that defines Reloj de Sol manages to minimize the weight of the material elements (steel, mirrors, etc.) that is required to concentrate the radiation, without lowering concentration performance. This means an investment cost per kW which can be reduced to one third of current commercial technologies cost.

Reloj de Sol is a solar radiation concentrator with a configuration of longitudinal cylindrical mirrors, with the same focal axis, that is fixed in a platform that rotates horizontally as the pointer shadow in a sundial.

All solar radiation concentrators that use moving mirrors to focus the radiation involve the use of high material weights, to make the structure more rigid. Reloj de Sol needs about 20 kg of flat and cheap mirror (that deforms in the assembly), 15 kg of steel and 30 kg of concrete to capture a 1 kW thermal power in the heating fluid; compared with 30kg of tempered and curved mirror; 50kg of steel and 100kg of concrete, which requires a conventional assembly. Reloj de Sol manages to reduce the cost by 65% because of this material decrease.

This configuration is related to the so-called Fresnel Reflection assemblies, but with features that are not common to that family.

“The wind energy grew from being non-existent to have more than 25 GW of installed capacity during the past 25 years in Spain. Over the next 25 ones, similar increases must be expected with solar thermal energy with the closing of coal and nuclear plants”

• The Thermo-Energetic research group has a previous project as a reference: the “Future Solar” Project with OHL company (2015).